7 Thanksgiving-Inspired Appetizers for Your Wedding Menu | Wedding Ideas ARE YOU A VENDOR?
Food & Beverage

7 Thanksgiving-Inspired Appetizers for Your Wedding Menu

By Alice Prendergast October 5, 2020 1
Saved Save
Who doesn’t love Thanksgiving food? Here are a few traditional dishes that have been transformed to fit your wedding cocktail hour.

One thing everyone gives thanks for on Thanksgiving? The food, obvi! Turkey, gravy, stuffing and the like have pretty much every Canadian counting down the days until the holiday. If you’re looking to infuse your wedding cocktail hour with a bit of Thanksgiving flavour, we’ve got some ideas for you. No, it won’t be the same as your grandma’s home-cooked meal, but it’ll be delicious nonetheless.

Here are a few appetizers inspired by your favourite Thanksgiving foods.

You probably don’t want to serve roast turkey with all the fixings at your wedding cocktail hour, so aim for something a bit simpler. One great option? Turkey lettuce wraps. These will give you all that great Thanksgiving flavour with a lot less labour. All they require is butter lettuce, ground turkey, some spices and a few seasonal veggies. They’re pretty tasty, so don’t be surprised if your guests eat them up in mere minutes.

No Thanksgiving dinner is complete without a solid supply of cranberry sauce. Though you may not want to pair any of your apps with this festive condiment, there are other ways to incorporate cranberries in your cocktail hour. One of our favourites is the humble cranberry crostini. They’re super easy to make: simply pile some toasted bread with brie, cranberry sauce, crumbled goat cheese and rosemary. Feel free to try out different herb and cheese combos, it’s hard to find a bad one.

Are you the type of person that fills half their plate with stuffing? Boy, do I have the appetizer for you. Bacon wrapped stuffing bites are pretty much everything you could want in a hors d’oeuvre; they’re salty, they’re carby, they’re indulgent AND they’re bite-sized. We suggest giving your caterer your favourite stuffing recipe so that they really taste like Thanksgiving at your place.

If you’re hosting your wedding in the colder months, you’ll probably want to give your guests some cozy cocktail hour eats. One tried and true favourite is soup shots. We suggest replacing squash - a classic Thanksgiving side - with some itty bitty portions of pumpkin or butternut squash soup.

Want to add something truly indulgent (and Canadian) to your wedding cocktail hour menu, sweet potato poutine is the way to go. This dish features two beloved Thanksgiving staples: gravy and yams, so you really can’t go wrong. Bonus: it makes for a great late night snack as well, so don’t be afraid to serve it a few hours into your reception.

Mashed potatoes are another Thanksgiving dish that people can’t seem to get enough of. While you probably don’t want to serve shot glasses filled with them, there are ways to incorporate this stellar side into your wedding cocktail hour menu. Potato cakes (AKA fried mashed potatoes mixed with herbs and spices) are a great way to do so. You can even serve them alongside itty bitty pots of gravy for dipping (yum!).

You’ll want to balance out all those savoury bites with some sweet treats. Traditionally, pumpkin pie is served at Thanksgiving, but you probably want to save that big ticket item for later on in the evening. So what should you offer up instead? Pumpkin spice timbits. They’ll give you a similar effect but won’t take away from the star of your dessert table.

Find your wedding caterer on WeddingWire » 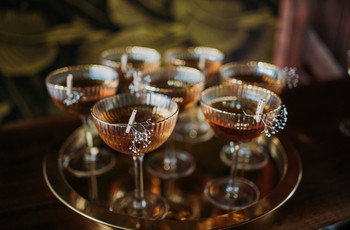 Food & Beverage 6 Champagne Cocktails Worth Serving at Your Wedding Up your champagne game by adding a few of these bubbly cocktails to your... 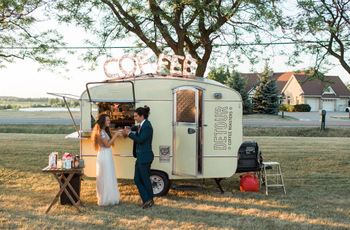 Food & Beverage 5 Coffee Cocktails Worth Serving at Your Wedding Looking for the perfect signature drink to add to your wedding menu? Give your... 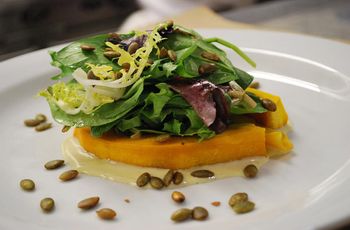 Food & Beverage 5 Ways to Serve Pumpkin at Your Wedding If you love autumnal eats, then adding a few pumpkin dishes to your wedding menu... 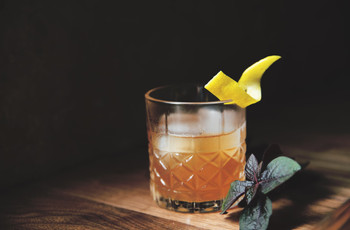 Food & Beverage How to Create Your Signature Wedding Cocktails Every good wedding bar has a signature cocktail or two. Here’s how to create a...
See more articles