What is a Handfasting Ceremony? | Wedding Ideas ARE YOU A VENDOR?
Traditions

What is a Handfasting Ceremony?

By Alice Prendergast March 17, 2021 4
Saved Save
Want to infuse your wedding ceremony with a little more meaning? Then turn to this Celtic tradition.

From the lighting of unity candles to a tree planting ceremony, there are plenty of wedding ceremony traditions out there to choose from. One of the most popular - especially among those with Celtic roots - is the handfasting ceremony (also known as a ribbon ceremony). Ask your wedding celebrant or officiant about incorporating this tradition into your big day to add a little bit more meaning and personality to your ceremony.

So what exactly is a handfasting ceremony?

When you think of ribbons, maypole dancing and rhythmic gymnastics may be the first things to come to mind, however, a handfasting ceremony (thankfully) doesn’t involve either.

The tradition began a long, long time ago (before 7000 b.c). in ancient Ireland. Back then, it signified engagement rather than marriage and was used to publicly show that a couple were betrothed to one another. A druid priest would proclaim a couple as engaged after a braided cord or ribbon was wrapped around their hands (the intention was to ward off any other suitors).

Over the years the tradition spread like wildfire, first reaching to Britain and Europe, then adopted by Christianity. Its meaning also underwent a bit of a metamorphosis. Irish Christian people who lived far away from churches and monasteries began to use handfasting ceremonies to signify their marriage (not their engagement). All that was needed was declared consent and a witness to bind their hands. A priest would finish the job next time he was in town.

Fast forward to today, a handfasting ceremony is considered to be legal and binding in some Irish and Scottish villages, but it’s also been adopted across the world. There are no rules stating who must tie the ribbon or how many ribbons must be used, so couples can really put their own spin on the ritual. For example, some couples may want to let their children tie their ribbons instead of their officiant. Some may want to go the old-fashioned route and use a single cord while others may want a bevy of multi-coloured ribbons.

Now, let’s talk about the ribbons themselves. Technically speaking, they don’t actually have to be ribbons at all. Yarn, thread or fabric will do the trick. You could even turn a family heirloom (like your grandmother’s quilt or your mother’s veil) into your ribbons to give you that “something old”.

Colour-wise, you’ve got options. While you could just go with a basic, neutral tone, now’s your opportunity to infuse your ceremony with even more meaning. As you probably know, each colour has its own unique meaning. For example, red is the colour of energy and passion while green denotes balance and growth. Find a few that mean something to you and run with it.

Once your ceremony wraps, remove your ribbons and put them away for safekeeping, this is definitely one momento you’ll want to preserve for the rest of your life. Then, move on to celebrating at your wedding reception!

Find your wedding officiant on WeddingWire » 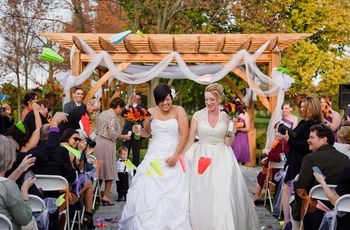 Traditions 10 Creative Confetti Ideas for Your Wedding Ceremony Exit You don’t have to be showered with rice as you make your wedding ceremony exit!... 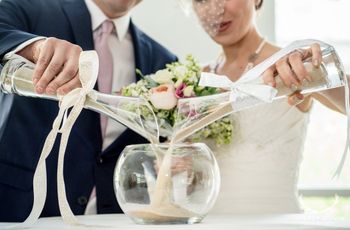 Traditions What is a Sand Ceremony? Want to make your wedding ceremony even more sentimental? Consider adding this... 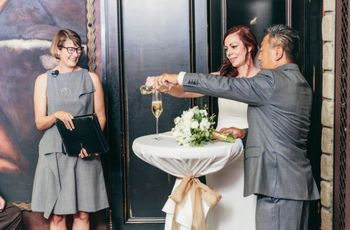 Traditions What is a Unity Water Ceremony? If you’re looking for a sweet and special way to take your wedding ceremony to... Traditions What is a Tree Planting Ceremony? If you and your partner were born with green thumbs, a tree planting ceremony is...
See more articles