Wedding Venues Ingersoll ARE YOU A VENDOR?

Wedding venues in Ingersoll: find the perfect place to celebrate your wedding day with our extensive range of listed venues. Be it a fairytale castle, an elegant banquet hall or a rustic country barn, you can find it here. Ask for prices, check availability and start planning the ceremony and reception you have always wanted. Elm Hurst Inn & Spa is a wedding venue located on 33 acres of rural landscape in Ingersoll, Ontario. Established in 1872, this landmark was once the starting point of the Canadian cheese industry. Its gorgeous spaces and trimmed lawns make it ideal for weddings and celebrations of all types and... (Wedding venues Ingersoll) 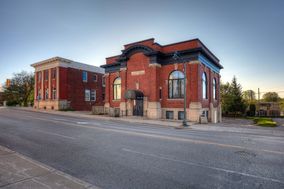 Carnegie Hall Ingersoll is a wedding venue located in Ingersoll, Ontario. Andrew Carnegie made a donation to the city of Ingersoll in 1908 to build the Ingersoll Carnegie Library. Because of various repair issues, the library was often faced with the threat of demolishment throughout the years.... (Venues Ingersoll)

Deals in your area

Wedding Venues in other towns of Ontario:

Other vendors in Ontario for your wedding