The American Rogues ARE YOU A VENDOR?

About The American Rogues

The American Rogues is a Celtic band based in Hamilton, Ontario. The touring group is known for their lively drum, bagpipe and violin performances all around the world. They have graced the stage for numerous events including opening for renowned violinist Lindsey Sterling, headlining for festivals in Scotland, and performing in Japan. The performers have even innovated their style by teaming up with a Japanese taiko drumming group for a blended sound. Using their experience the musicians put on captivating shows for intimate or large wedding affairs.

The American Rogues incorporate an array of soundtracks into their performances. They can play traditional Celtic music, rock, movie tracks, and more. Some popular film scores include "Game of Thrones" and "Outlander." Whether couples are looking for ceremony, cocktail or reception entertainment, the group can tailor a sound matching the settings. They can either put on shows with an acoustic or amplified sound and set up a group ranging from one to ten musicians.

More information about The American Rogues 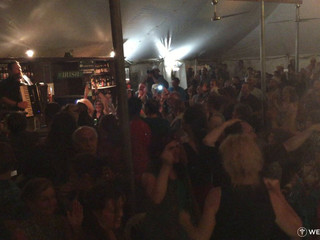 Team of The American Rogues

Dubbed "Bon Scottsman" by fans, and "Timpan" by his grandson, Canadian Nelson has been a musician for many years in such diverse musical genres as rock, Celtic, funk, punk, blues, folk, jazz, pop, soul, and classical. No surprise as he was raised on equal parts Soul Train, Hee Haw, and the Lawrence Welk Show. He is a singer/songwriter/producer who plays piano, guitar, accordion, bass, mandolin, sax, harmonica, bodhran, drum kit and various other drums, and he has studied Japanese drumming provided by members of world-renowned taiko group, Nagata Shachu. When Nelson is not performing with the American Rogues he also appears with Celtic Punk group, the Peelers (the-peelers.com), from Montreal. In 2018 Nelson was chosen as the Honourary Clan Chieftain for the Moncton Highland Games in New Brunswick, Canada.

Nelson was a founding member of the popular Celtic rock band, The Swinish Multitude. He later formed The FictionMakers, becoming their lead singer and chief songwriter. Nelson has recorded with various artists as a studio musician and has shared the stage with Allison Krauss, Bruce Hornsby, Lindsey Stirling, Jully Black, Haydain Neale (JackSOUL), Tom Wilson, Our Lady Peace, Big Sugar, Ashley MacIsaac, Leahy, Kilt, Queen Cee, and The Mahones. Prior to the American Rogues show with the U.S. Air Force Orchestra the highlight of Nelson's musical career was headlining gigs by The FictionMakers in Toronto at the Horseshoe Tavern, the Opera House, and the El Mocambo, site of legendary shows by U2, the Rolling Stones, and Stevie Ray Vaughan. He continues to write, produce and record in his own facility, Mayhem Studios. The award-winning American Rogues album, 3 LBS. OF RAGE, was recorded at Mayhem. Nelson has helped to raise funds and awareness for various charities including the Cancer Society's Relay for Life, the S.P.C.A, the Good Shepherd, Make-A-Wish Foundation, Habitat for Humanity, the Canadian Diabetes Assocation, and Interval House. He was inspired to create DEAKSTOCK in 2007 to provide assistance for Armed Forces Veterans through the close friendship he has with various members of the military and through the deep respect he has for those who keep us safe.

Nelson graduated from McMaster University on the Dean's Honour List with a double major in English and History. He also received a Bachelor of Education from the University of Western Ontario, again on the Dean's Honour List. He teaches in Canada where he also conducted a stage band, a funk band, a concert band and coached soccer, volleyball, and football. Nelson also conducted and performed with a professional group comprised entirely of musicians who had been taught by him called the Waterdown Show Band. He was Assistant Producer of large, multi-cultural Martin Luther King Day concerts held in Canada, and he regularly performed at annual Black History Month concerts. His school bands also recorded their first album in the music room at his school. Entitled Rock & Soul, the album includes songs by Stevie Wonder, the Police, the Bar-Kays, the Beatles, the Commodores, Queen, Blink 182, Ozzy Osbourne, and Isaac Hayes, among others. His passion for education has led to his nomination for a Profiling Excellence Award, a series of designations recognizing and honoring exemplary programs and achievements within his school board (he was told he didn't win because it is only awarded to groups of people, not individuals).

Andrew MacPhail began his tutelage on the bagpipe under the guidance of Anthony Jones and later Pipe Major John Terrance of the Argyll and Sutherland Highlanders of Canada. In 2000 Andrew began playing with the Argyll and Sutherland Highlanders and had the pleasure of performing for Queen Elizabeth II at her Trooping of the Regimental Color ceremony in October of 2002.

At this point in Andrews piping career he entered the competitive sphere of solo and band performance while musically developing and flourishing under the private instruction of Champion Piper John Cairns of London Ontario. As a competitor in the George Sherriff Invitational, Nicol-Brown Invitational, and as the 2008 winner of the Metro Cup in New York City; Andrew excelled as a soloist and was upgraded to the competitive level of Professional at age eighteen.

On three occasions Andrew has traveled to Glasgow, Scotland to compete in the World Pipe Band Championships with the 78th Fraser Highlanders Pipe Band under the direction of Pipe Major Bill Livingstone. As well as once with the Peel Regional Police Pipe Band under the direction of Pipe Major John Cairns. On these occasions Andrew has placed as well as fourth in a field of the premiere level pipe bands of the world.
In pursuit of higher education, in 2009 Andrew auditioned for and received a full-scholarship to Monmouth College in Monmouth, Illinois. Whilst perusing his Bachelor of Arts Degree in Music Performance at Monmouth College he accepted the role of acting Pipe Major in the Liberal Arts institutions Pipe Band.

As a student of Monmouth College Andrew studied Music Performance with instrumental specialization in Trumpet. During this time his theoretical and performance tutelage was under the principal instruction of Dr. James Betts. Andrew's ensemble experience consists of acting Principal Trumpet of the Monmouth College Orchestra, and Symphonic Wind Ensemble.

In addition to his experience in band and chamber ensembles, Andrew has performed solo recitals in collaboration with accompanists showcasing a diverse repertoire of music. Works span from the Barouque Suite in D Major by Handel for trumpet and organ, to Contemporary pieces such as the Arutunian Trumpet Concerto and Anthony Plog’s Themes on Paintings of Edvard Munch.

Andrew recently added Scottish Border Pipes to the list of instruments upon which he performs.

Born and raised in Annapolis, Maryland to a Navy family Jeania Stewart now lives in Canada and is of Native American, Irish, and Nordic ancestry. She has been with the band since 2006 and during that time has helped to expand and refine its sound and image. On the award-winning AMERICAN ROGUES album, 3 LBS. OF RAGE, Jeania sings in both Welsh and English and plays bodhran. She also studied Japanese drumming provided by members of the world-renowned taiko group, Nagata Shachu. She plays piano and is a gifted artist who paints, sketches, writes, and creates stained glass, jewellery, and ice sculptures. She is also a seamstress who creates much of the clothing seen on stage at the band's shows. In addition to performing and recording with the band Jeania also books many of the group's shows and is an integral part of the creative process by helping to design graphics and album covers, t-shirts, etc.